We’re quite a fan of mens watches here at manlystuff.ie, in case you hadn’t copped that!

There’s something about wearing a nice watch that takes us back to more simpler times where the little things were appreciated and people didn’t lose their shit over the smallest bit of celebrity news or jump on the latest bandwagon. Men absolutely love watches which is why we provide such a vast, ever expanding collection of Men’s Watches. We’re also a big fan of Ireland Inc. and believe that since the recession, the creative side of Ireland has really come to the fore both in terms of the recovery of the country and of the small artisan producers that rode out the difficult times to emerge the other side.

It was the smaller shops that kept the country going and I really think that gave Ireland back something – it’s a shame the Starbucks of the world are slowly eroding that innovative uniqueness, one shop at a time. But anyway.

There are numerous Irish Watch companies now that are designing and making (sometimes both) beautiful timepieces in Ireland.

W&W (Watch & Wallets) was founded by Sean Treacy after being sick and tired of spending crazy money on sub quality watches. Always a fan of a classic Omega, he found his Grandad’s Pocket Watch that he brought to and home from, WWII. He fell in love with the classic dial and wanted to create a modern watch with the same features.
Sean spent 8 months designing the watch which has a Japanese Seiko Movement (Swiss Automatic ETA coming next), 316L Stainless Steel case, Italian Leather or Milanese Quick Release Strap and Hardened Crystal Glass.
W&W are sold online on our website, on their own website and in select watch stores throughout Ireland.

NTN is a watch company that we stumbled across in the Irish Design Shop on Drury Street a few years ago. They started out two years ago as a side project of Ian Walton and are based in Dublin. They’re unfortunately no longer around but we wanted to remember their stunning designs here.

Sold online and stocked in select Dublin stores, the watch features a stainless steel case made from just two parts and is available in three finishes, accompanied by a choice of four hand-stitched, vegetable-tanned leather straps in almond, black, fog or blue. Designed and fully produced in Dublin, NTN is set to put the city on the watch-making map in 2018.

A friend of ours, Rob Maquire introduced us to the fascinating creations of the McGonigle brothers when he shot a video for them. Luxury mechanical watches are created by McGonigle . The brothers picked up their passion from their father, whose primary hobby consisted of repairing clocks for friends and neighbours. Having both attended Dublin’s Irish-Swiss Institute of Horology (ISIH) – and gathered work experience in world-renowned Swiss Watch companies like Audemars Piguet, Franck Muller and Christophe Claret – the brothers set up their own brand in 2006, in their hometown of Athlone.

Marrying Swiss technicality with Irish flair, McGonigle’s incredible collection of watches has appeared in Forbes magazine, and pieces are available to purchase only after enduring a waiting list that lasts months. In 2016, the brothers released the Ceol Minute Repeater – their most complicated design yet, called ‘a Celtic masterpiece’ by SalonQP fine watch magazine. Each one, hand-finished to the order of the end user, sells for upwards of €200,000. You’d better start saving! It’s truly great to see that an Irish company can fetch such prices for their creations, a true testament to the quality and high regard of Irish crafts.

We came across Ansley Watch company when wandering around Kildare Village. Ansley Watch Company came on the scene back in 2013. Designed in County Meath by Irish and Swedish design duo Arthur and Eda Smith, these stylish watches are traditional in style and yet still contemporary, and are made to be treasured – with faces made from 42-millimetre and 36-millimetre sapphire glass.

Ansley makes similar timepieces for both men and women, with interchangeable leather and woven straps available. Every watch is engraved on the back with the ancient symbol for equality and comes with its own classic leather travel wallet. 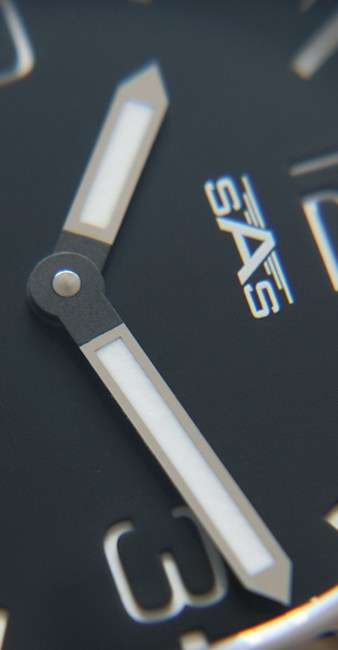 SAS Watch Company’s watches are not the type to be worn to work. Unless you work as an adventurer! SAS is an acronym for Sea, Air & Sport, referring to the fact that this brand produces watches specially designed for divers, pilots and sportspeople. Their durable Dubh Linn dive watch has been over-engineered and can survive depths of up to 1,000 meters (3,281 feet), while the AIR First Edition showcases a slightly sleeker silhouette. All SAS designs are made with Swiss movements.

Having partnered with Irish explorers Mike O’Shea and Clare O’Leary and supplied watches for part of their Ice Project expedition (with a little help from John of McGonigle), SAS has more than proven their chops in the realm of tough watches. Based in Wicklow – where several of their pieces are hand-assembled – SAS also produces a line of military watches called Míleata, made with the strongest materials available and designed to match military service uniforms.

The Irish Watch scene is strong! Whether you’re talking the offering from W&W and they’re huge range of minimalist watches or Ansley Watch company and their stunning unisex range, you can purchase a stunning watch without having to go to the likes of Daniel Wellington or Cluse watches. Support your local small business today and make sure they survive they thrive!

Your Shopping Cart – Fill er up!

TAKE 20% OFF YOUR ORDER WITH THE CODE 'LASTSALE22'! TODAY ONLY! Dismiss

Have a question? Whatsapp us!
Go to Top